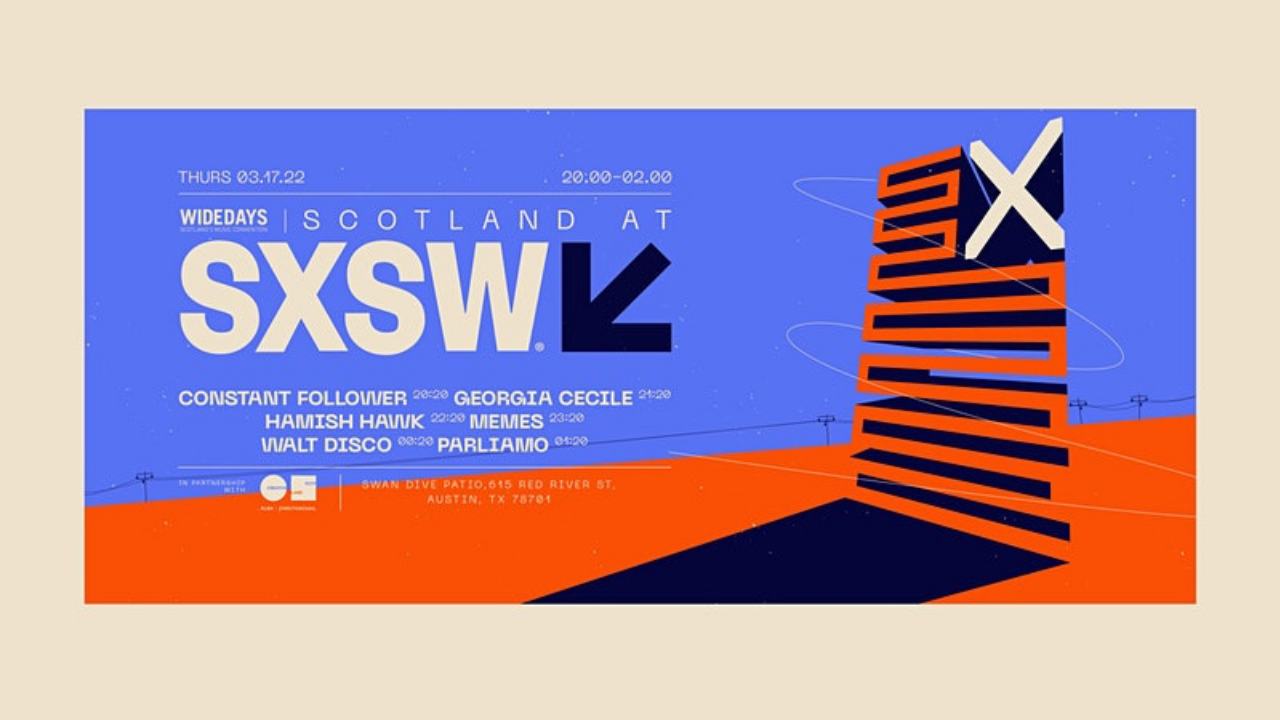 In addition to the artists playing the official Scottish showcase, Gallus, Joesef, KT Tunstall, Rianne Downey and We Were Promised Jetpacks will also perform at the festival from 14-19 March.

The showcase will mark the first time Wide Days has officially collaborated with SXSW in-person and follows an official presence at SXSW Online in 2021, where the organisation presented four acts filmed at Edinburgh’s Leith Theatre, watched by audience members and industry representatives from across the globe.

Wide Days involvement at SXSW forms part of a wider programme of international activities being delivered by the organisation throughout 2022, designed to provide developmental and promotional support to a broad range of artist and music industry representatives.

Earlier this month, the company hosted a Scottish presence at Swedish convention, Future Echoes, which takes place in UNESCO Music City, Norrköping. It included a reception, presentations and the participation of former Wide Days artists, Kapil Seshasayee, who performed three showcases and took part in a songwriting camp.

SXSW has been a long-standing key event in the music industry calendar, attended by thousands of professionals and music fans alike from across the world. We are delighted to be heading out to Austin to support the Scottish contingent this year, and looking forward to hosting the official Scottish showcase with some of the most exciting new talent the country has to offer.

Scotland returns to Austin in 2022 and will once again showcase an outstanding array of talented musicians at the world’s largest music industry event, with a dedicated stage. As we emerge from a difficult few years, crucial opportunities such as this enable artists to reach new audiences in the US and make all important connections with music industry and media from across the globe.

Despite the challenges faced in the last two years, musicians in Scotland have not stopped pushing boundaries, and the artists selected by SXSW to perform in 2022 represent a snapshot of some of the emerging talent who are ready to take the next steps in their career. SXSW is among a range of the high profile events where Scotland will have a presence delivered by Wide Days, supported by Creative Scotland. Partnership with the PRS Foundation on the International Showcase Fund also provides crucial funding to the acts to enable them to travel.

Following SXSW, Wide Events CIC will present the 13th edition of the Wide Days convention in Edinburgh on 19-21 May, bringing together the country’s music industry to connect and participate in sessions with industry delegates from across the UK, Europe and the rest of the world.

The event will also showcase a selection of emerging talent participating in an international talent development programme. Wide Days has previously showcased all the artists performing the Scottish stage at SXSW (with the exception of Georgia Cecile), as well as acts including C Duncan, Kathryn Joseph, Fatherson, Honeyblood and many more.