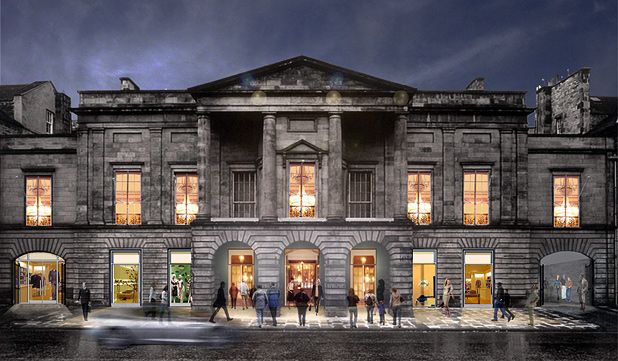 The most prestigious night in Scotland’s music calendar is heading to Edinburgh, after it was confirmed that the Scottish Album of the Year (SAY) Award will make its debut in the capital city in September 2019.

Now in its eighth year, The SAY Award is Scotland’s national music prize and celebrates, promotes and rewards the most outstanding albums released each year. Showcasing the incredible strength and diversity of Scotland’s musical landscape, artists, industry and music fans will be able to submit eligible albums for 2019’s campaign via sayaward.com from 1 May. With no entry fee or marketing contribution required from artists or their labels, the award is a highly accessible platform for artists of all genres and at any stage of their career.

Boasting a £20,000 prize for the winner, nine runner-up prizes of £1,000 each and a design commission which highlights the enduring links between music, art and design in Scotland, The SAY Award weids one of the UK’s most lucrative prize funds (supported by Creative Scotland) and has distributed a total of £203,000 in prize money to some of Scotland’s most important and influential artists since launching in 2012.

Award the Scottish Music Industry Association (SMIA) are bringing both Live at the Longlist (a ticketed live music event announcing the 20 outstanding albums nominated for the prize) and the final award ceremony to Edinburgh in 2019. Live at the Longlist will take place in July at The Queen’s Hall as part of the venue’s celebrations throughout 2019. Working in partnership with Edinburgh City Council, the final award ceremony will then take place in September at The Assembly Rooms, celebrating each of this year’s nominated albums and revealing who will receive the coveted title of Scottish Album of the Year and the £20,000 first prize.

Robert Kilpatrick, General Manager, Scottish Music Industry Association (SMIA) said: “The SMIA is absolutely delighted to be bringing the Scottish Album of the Year (SAY) Award to Edinburgh in 2019. Edinburgh has no shortage of fantastic cultural events, but as Scotland’s national music prize, we’re delighted to see one of our country’s most exciting music events make its debut in the capital city. As has been well documented, live music in Edinburgh has faced challenging times in recent years with the loss of several key grassroots venues. Edinburgh excels at providing a platform for many other cultural strands, so we are delighted to be working with Edinburgh City Council to amplify the cultural importance of live music in our capital city.”

Councillor Donald Wilson, The City of Edinburgh Council, said: “Edinburgh is delighted to be the host city for the Scottish Album of the Year Award in 2019. Now in its 8th year, the Scottish Album of the Year Award has gone from strength to strength and now represents the pinnacle of creative achievement in contemporary Scottish music. With Young Fathers winning last year’s award, it feels very exciting and relevant to be the host city for 2019. We are committed to making Edinburgh a great city for music on all fronts – from grass roots all the way through to our world famous festivals and venues. ‘Live at the Longlist’ will be hosted in the Queen’s Hall – a great way to celebrate its 40th anniversary – and the final award ceremony will take place in the historic Assembly Rooms now in its 231st year! We feel that this will provide a great addition to the exciting 2019 calendar of music lined up across in the city.”

Alan Morrison, Head of Music, Creative Scotland said: “Following in the footsteps of last year’s winners, Edinburgh trio Young Fathers, it’s great to see the SAY Award head to the capital for its 2019 edition. The city has its own enviable history of music, from the folk revival days of the 1960s, through the post-punk years, to a vibrant international classical scene. Hosting both Live At The Longlist and the SAY Award ceremony itself will be a tremendous boost to Edinburgh’s musical energy. Creative Scotland is proud to support an event that champions the very best of Scotland’s music across all genres.”

Evan Henderson, Chief Executive, The Queen’s Hall, commented: “Making the connection between The SAY Award and the Queen’s Hall made complete sense to me, and when I took over as CEO, I made a point of working towards enticing the event east. The Queen’s Hall has a long supported both emerging and established talent of all genres over our 40 year history. We have the perfect space, both in its intimacy and it’s renowned acoustics, which I feel will do our most creative Scottish artists proud when we host ‘Live at the Longlist’ this year. Edinburgh has world class venues of all shapes and sizes, from the grungy to the most elegant. The SAY Award – won by Edinburgh’s Young Fathers in 2018 – shines a spotlight on the creative heart and the burgeoning new music scene growing in this city and throughout Scotland.”

Respected by artists and valued by the industry, each year The SAY Award is responsible for a surge in musical discovery and an explosion of impassioned debate on social media. Previous winners are Young Fathers’ ‘Cocoa Sugar’ (2018), Sacred Paws’ ‘Strike A Match’ (2017), Anna Meredith’s ‘Varmints’ (2016), Kathryn Joseph’s ‘Bones You Have Thrown Me And Blood I’ve Spilled’ (2015), Young Fathers’ ‘Tape Two’ (2014), RM Hubbert’s ‘Thirteen Lost & Found’ (2013) and Bill Wells & Aidan Moffat’s ‘Everything’s Getting Older’ (2012).

For more information on The SAY Award, please visit www.sayaward.com